WHO IS FRANCIS LEO MARCOS? This billionaire gains prominence when his Mayaman Challenge spread like a virus in both Facebook and Youtube a few weeks ago.

IS FRANCIS LEO REALLY A MARCOS? Photo shows Francis Leo Marcos striking a pose with former First Lady Imelda Marcos. But a member of the Romualdez-Marcos clan has disowned Francis and says he is not a Marcos. Is he an impostor?

Part 1 of a series

METRO MANILA, Philippines (Special MDN News Feature) - This billionaire businessman is unknown to many Filipinos until he became the newest Youtube and Facebook sensation, when he started his "Mayaman Challenge," urging the rich and famous to get out of their abode and help the hungry Filipinos in Metro Manila who were greatly affected by the lockdown imposed by President Rodrigo Duterte. 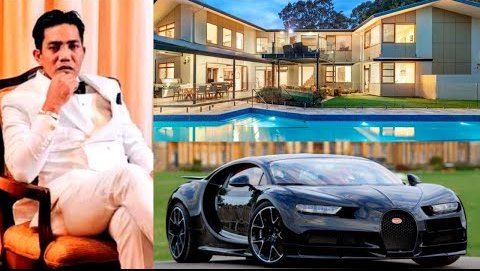 WHO IS FRANCIS LEO MARCOS?

To start his Mayaman Challenge advocacy after maybe, being bored of being home quarantined in Metro Manila, Francis Leo Marcos went out of his house and drove his luxury vehicle and made some commentaries while driving, urging the rich families inside Green Meadows Subdivision, where he also lives, to share their millions. Marcos, thru a video, also showed the houses of rich people while driving his own car.

Part of his challenge was purchasing 500 sacks of rice and gave them to the poor communities in Payatas. Payatas is a barangay located in the 2nd district of Quezon City, Metro Manila, Philippines. Hundreds of thousands of poor Filipinos are found in this barangay.

Some of the notable vloggers and residents of Metro Manila has responded to the call of helping the poor residents and daily income earners who were badly affected by the lockdown. They include people working in small and medium companies, passenger jeepney drivers, pedicab drivers, ambulant vendors, beggars in the streets of Metro Manila and all other famies who are considered poorest of the poor, who have no means of supporting their familes and are now hoping for immediate government intervention for their daily survival food support.

The Philippine Government has already expected this so that President Rodrigo Duterte has alloted more than P200 Million government funds to help those affected by the crisis and couldn't barely buy their food.

But as the days become a week and more weeks had passed, the growing concern for food support is riverberating in the slums and areas populated by low income earners in Metro Manila.

Francis Leo Marcos promises to use his P20 Million liquid asset to help the poor Filipinos and this started with his 500 sacks of rice. But a few of the rich people in Metro Manila has started to respond to his challenge and also started buying groceries and sacks of rice to distribute to the poor people in the slums of Metro Manila.

"I am very thankful some of the rich people in Manila has started to respond to my challenge. I hope other people who are rich would not just keep silent of this coronavirus pandemic," I am appealing to them to get out and share their millions to the poor. This is the best time," he says.

NEW HERO OF THE POOR

Then here comes the newest hero of the masses - Francis Leo Marcos aka Norman Mangusin. Why he has two names?

Wait for part 2...Thanks