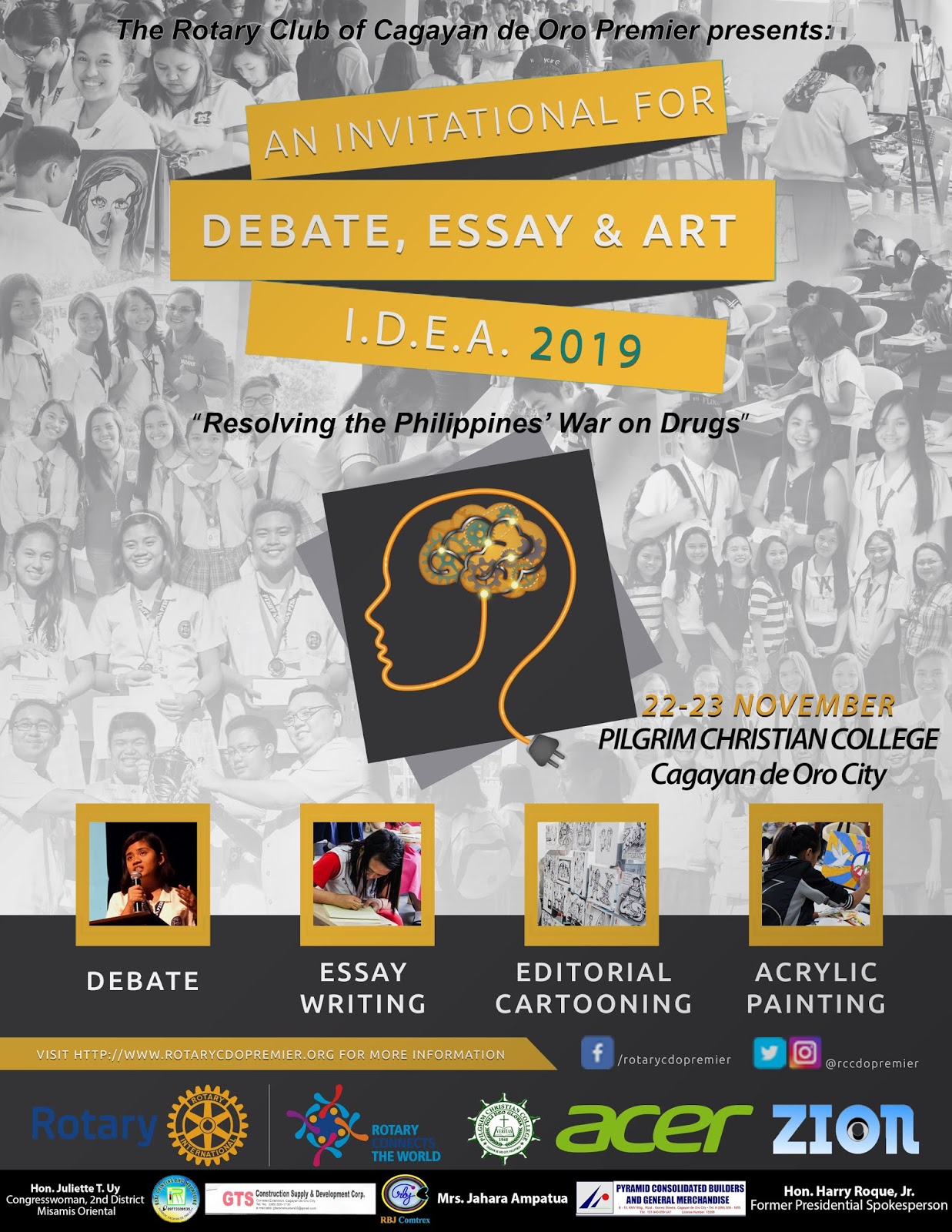 Cagayan de Oro City - The issue on the government’s War on Drugs has gripped the country into a complicated, continuous, and critical debate.  Our government has taken a strong stand against the sale and use of drugs as it vows to put an end to its proliferation in our communities.

Many quarters question the effectivity of the government’s efforts and raise serious concerns on the human rights violations resulting from the methods used in the war on drugs.  In this year’s I.D.E.A. (An Invitational for Debate, Essay, and Art), high school students from all over Mindanao join the conversation and bring forward their perspective on how best to address this pressing issue.

I.D.E.A. 2019 is unlike other academic competitions both in scope and impact. It is the biggest and most influential multi-disciplinary inter-school competition in Mindanao with over 200 junior high school students from around 50 public and private schools from the provinces of Misamis Oriental, Misamis Occidental, Lanao Del Norte, Lanao Del Sur, and Bukidnon and the cities of Cagayan de Oro, Butuan, Cotabato, Iligan, Ozamiz, Tangub, Malaybalay, and Valencia.

The Rotary Club of Cagayan de Oro Premier, in cooperation with Acer Philippines and Zion Diagnostics, proudly brings back I.D.E.A. 2019 where the students will compete in 4 scholastic events: Debate, Essay, Editorial Cartoon and Painting.  These young minds will grapple with topics which revolve around this year’s theme: “Resolving the Philippines’ War on Drugs” seen in light of the complications of achieving success in abating and controlling drug use.

“We wish to engage young students in Mindanao to think about and have informed opinions on important issues and to realize that they are stakeholders in their own communities”, says RC CDO Premier Past President and Over-all Project Chair Marion Hazel Du.

The Invitational, launched in 2015 as part of the RC CDO Premier’s mandate to address Rotary International’s six areas of focus, specifically the promotion of peace and conflict resolution, will be a two-day affair. It will be held on November 22-23, 2019 at Pilgrim Christian College, Cagayan de Oro City.

Previous themes have addressed the following peace and conflict issues:  2015 – the proposed creation of a Bangsamoro region; 2016 – the territorial dispute between the Philippines and China; and 2017 – lasting peace achieved through use of force as learned from the lessons of the Marawi siege.

“It is important to hear what the youth of Mindanao have to say about relevant and pressing topics, albeit controversial, which affect them the most,” adds RC CDO President  Maria Teresa Sarraga. Thus, I.D.E.A. 2019 was not envisioned merely as an academic competition. It is also geared to be a public awareness and public information platform on peace and conflict resolution issues, including the struggle to finally put an end to the drug problem in the country today.

I.D.E.A. 2019 is brought to you by the Rotary Club of Cagayan de Oro Premier in partnership with ACER Philippines and Zion Diagnostics.  This event would also not have been made possible without the support of our major sponsors RBJ Contrex, Rep. Juliette Uy of the 2nd District of Misamis Oriental, The Pink Box, Former Presidential Spokesperson Harry Roque, Jr., Mrs. Jahara Ampatua, GTS Construction and Supply, and Pyramid Consolidated Builders & General Merchandise.

‘Taiwan in Design’ Set to Grace Taiwan Expo 2019 in Davao

DILG Camiguin readies for next round road clearing validation

DILG Camiguin readies for next round road clearing validation